30 YEARS OF QUALITY
Cookie preferences
This website uses cookies, which are necessary for the technical operation of the website and are always set. Other cookies, which increase the comfort when using this website, are used for direct advertising or to facilitate interaction with other websites and social networks, are only set with your consent.
Configuration
Technically required
These cookies are necessary for the basic functions of the shop.
"Allow all cookies" cookie
"Decline all cookies" cookie
Affiliate code
CSRF token
Cookie preferences
Currency change
Customer-specific caching
Individual prices
PayPal payments
Selected shop
Session
Comfort functions
These cookies are used to make the shopping experience even more appealing, for example for the recognition of the visitor.
Note
Statistics & Tracking
Affiliate program
Track device being used
Categories 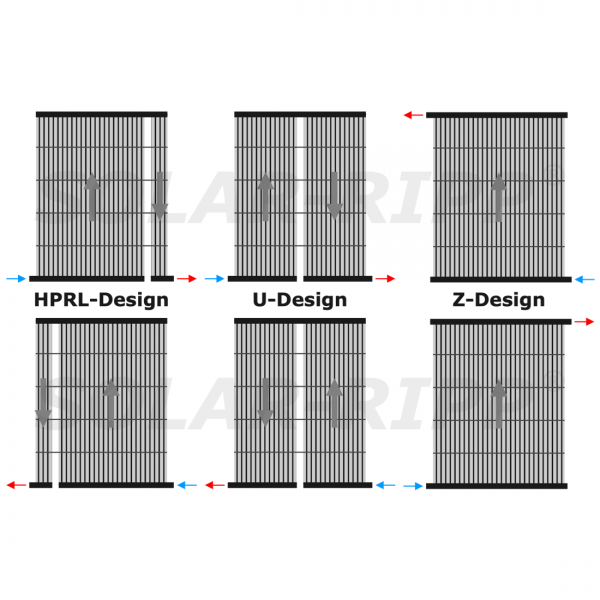 In 2003 the SOLAR-RIPP ® founder Dipl.-Ing. (FH) Andreas Appel created the words U-Design and Z-Design and thus described the location of the connection points on rectangular solar absorber surfaces, which can strongly influence the flow properties. This influences the physical parameters for pressure loss, flow velocity, degassing, etc.

The Z-Design was previously called a diagonal absorber by the engineer Appel at the end of the 1990s and represents the simplest form of flow, namely simply at two diagonally opposite corners of the rectangular area, according to the Tichelmann principle. This arrangement was often used for hanging pitched roof installation (distributors and collectors arranged horizontally, the ribbed solar tubes then run in a vertical direction).

Engineer Appel previously referred to the U-Design as a reverse absorber at the end of the 1990s and describes two corridors of the same size in a total area with opposite flow directions. This arrangement is often used for flat roofs and wall or fence mounting, but causes ventilation problems if the solar hoses are arranged at an angle when the distributors / collectors are horizontal. The numerous parallel finned tubes reduce the flow speed, trapped air bubbles cannot be pushed down in the downward-facing corridor. As a result, this return corridor is poorly filled with water, as a lot of air collects in the upper area, the flow is impeded, and the efficiency is poor. A check by lifting the hoses by hand quickly shows whether they are light, i.e. empty, or heavy and filled with water. If the solar tubes are horizontal, this problem does not arise, regardless of whether the surface is mounted horizontally or vertically.

The search for a more concise, more handy designation of reverse and diagonal absorber then led the engineer Appel to the word creations U- and Z-Design in 2003, which have largely been replaced functionally today by the more modern HPRL-Design, as this new variant has all the advantages of the two older versions and represents a very technically and economically effective construction (in addition to these word creations, the engineer also created the terms H-Design and P-Design, which are used for the parallel, side-by-side arrangement of individual rectangular surfaces, e.g. when a later lateral area enlargement is planned).

The current HPRL-Design: The absorber inlet and outlet are each on the same head side (as with the U-Design), but the areas are different in size. The return corridor in the HPRL-Design is precisely dimensioned in such a way that, on the one hand, there is no higher increase in pressure loss than with the saved, otherwise parallel return line next to and outside the solar area, but on the other hand, the flow speed of the water is increased in such a way that optimal degassing is achieved upwards rising air bubbles are torn down with it (in the case of a type of installation in which the ribbed solar hoses run vertically). This construction makes full use of the existing roof area up to the outermost edge (by eliminating the parallel return line) and is ideal for a hanging pitched roof installation, since the return does not have to be installed at the height of the roof ridge, but only at gutter height. This arrangement also shines with garden sheds or two pitched roofs one behind the other. Shorter distributors / collectors are supplied by us in just one piece due to an internal separation. Larger widths are made up of several parts for transport reasons. If you have special requests, please contact us or send us a sketch; we implement almost any solution. Read older post ...

In connection with the aforementioned SOLAR-RIPP ® word creations, there are personal copyrights and registered industrial property rights at the German Patent and Trademark Office in Munich (10 2014 012 488.6, 30 2013 063 1633, 30 2015 003 352) and at EUIPO, the European Union Intellectual Property Office in Alicante (018441763, 018443213). Any use of these word creations not authorized by us in writing does not constitute a trivial matter and can therefore result in considerable penal consequences and additional high follow-up costs with claims for damages.

Related products
SOLAR-RIPP ® BTO 300cm x 600cm (18m2)
For prices, please sign in.
This website uses cookies, which are necessary for the technical operation of the website and are always set. Other cookies, which increase the usability of this website, serve for direct advertising or simplify interaction with other websites and social networks, will only be used with your consent.
Decline Configure